Home Cut your Prestashop Load Time in Half

Cut your Prestashop Load Time in Half

Rarely is it I ever write an article about a module that I did not develop. I think I have only done it once or twice before. But a few weeks ago I was contacted on the forum and they wanted me to beta test a new caching module. I write a lot of articles about optimizing Prestashop sites, so I was game to test it out. I honestly really did not expect much from the module though. I actually purchased a caching module last year from another company. I paid around $300 -$400 for it and all it really did was slow the sites down. I say sites, because I bought it for a project and it made the site load about 1 second slower than not using the module. So I tried it on another site and got the same results. But that was with the other module from another company. Once I started testing this new module by

Xtendify I was very surprised.

The quickest answer to that question is yes, it worked. The longer answer is that it actually cut the load time of the site in half. The site that i tested the module on is Wonderland Wigs, it is pretty well optimized, so I was not expecting any gain really. I can say just about anything, but I think it is easiest to just show you the numbers and let them speak for themselves.

Here are a couple of Pingdom tests without the module enabled. I ran the tests from the Netherlands, because the site is hosted in the UK and that is their closest test server. 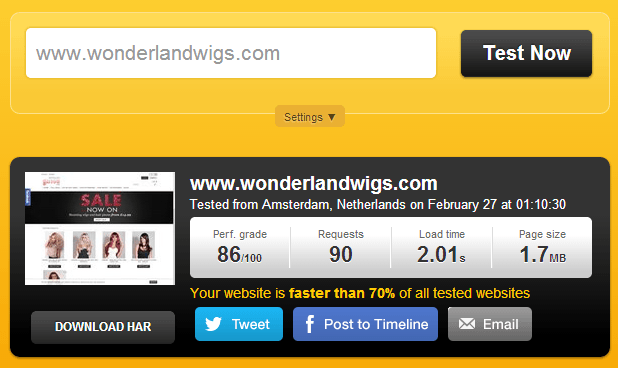 With the Module Enabled

You can see the difference with the module enabled. It is easiest to say that it cut the load time in half, but that is not really correct. It actually took about 60-65 % off of the load time which is a lot better.

Setting Up the Module

When you install the module it will look like the image below in the backoffice.

When you actually configure the module, it will be about the simplest module that you ever configure. There are only really 3 settings in the configuration page. The timeout can be set for as long as you like, if you do not update your shop regularly I would suggest setting the time out very high.

For the filesystem vs database, this is a setting that I would think depends on the server type that you use. I would test both out and go with the one that seems to work faster for you.

I was very surprised by how well this module worked, but the thing that surprised me the most was the cost. The module only costs $40usd. That is a steal for the kind of performance increase the you will see in your shop. I think this is going to be one thing I add to my toolbox for when I optimize Prestashop sites.

Where can you get it?

You can get the module here, at Xtendify’s site.