Are you wanting to break into the world of e-commerce, but you don’t know what to sell or how to do it? This article might be right up your alley, I will tell you how I did it. I have spent years developing sites for clients, seeing what they do right, what they do wrong, and learning from them. Earlier this year I decided to open my own store taking everything I have learned and putting it to task to see if I could make a profitable e-commerce site. The results to me were somewhat surprising, but at the same time I had a good plan.

I do not manufacture or warehouse any products, so I had to decide what I wanted to sell and how I would sell it. I looked at all of the different drop shipping options and the cost to start each one. The first option I came to was Doba, I think they are one of the largest and most well known. But, to integrate them into Prestashop I would need to use Prestashop Store Manager and then buy the Doba integration plugin. That would be $199 + $129 for both pieces of software. That is on top of Doba’s $79 a month. To me, that seemed a little steep for starting a business.

I looked at a couple of other sites and then I came to a company called Inventory Source. What they offered interested me, their base plan was $50 a month using one feed from one supplier, but the kicker is that they have a Prestashop integration. This really interested me, so I signed up for a Doba account and an Inventory Source account. After spending a few hours spot checking prices, I realized that the prices were just about the same on everything. So I ended up going with Inventory Source, because honestly the price was right for what they were offering.

The way the site works with Inventory Source is pretty interesting. On their site you set the mark ups that you want, it can be per product, per category, or per supplier. Then every morning their feed updates your site with new products, pricing, and quantities. This works automatically like clock work.

One thing I would like to mention about them is their support. I run a program called New Relic on my server, it lets me know about application performance and errors. Their connector script set off a couple warnings on my server and because of the number of products, it would keep my server at a high error rate for a long time. To be specific the warnings were that they needed a check to see if a directory existed before creating images and the other warning was using an old way of connecting to MYSQL. I sent them a message suggesting the code changes and telling them about my issues. They changed it the next day and also credited me 3 days to my account because of the issue. They also did something that I find very rare these days, they called me back a couple of days later to see if the issue was fixed.

The site since it was developed before Prestashop 1.6 was released was written on Prestashop 1.5.6.2. For a theme I bought a pre-made theme from ThemeForest.net. The theme I chose was this one from TemplateMela. Honest opinion of the theme is that I would not buy it again. As a developer, looking at it and using it, it just seems hacked together. It has several issues that have been patched up, but at the same time I know that it is not the best choice at this point and I am considering a redesign. I will say I have submitted a few support requests about the theme and everyone was handled quickly. But at the same time I have designed dozens of themes from the ground up and purchased around 50 or so for clients and besides one other theme I have never had to submit a support request. Much less several.

It Worked, but not How you Think

I guess the main question everyone would want to know is how the site worked. It worked in a sense. I realize starting a site from scratch and trying to break into a market is tough, so I was not expecting much. So far I have had 8 people register on the site and had 3 orders. Keep in mind that of this writing I launched the site 2 weeks ago. Of the 3 orders I have made around $50usd or so. Not a lot to be honest. I haven’t taken time to do any external SEO, not really much social media, nothing really.

There is always a but. I knew going into this that I would not have the time to devote to do a full social media campaign, pay for advertising, or spend the time in the beginning doing the external SEO that the site would need. That was a given for me. So I had another plan. I wanted to port the shop out to Amazon and let them handle everything.

The Prestashop module for Amazon is pretty expensive, it costs $280 usd, but it was part of the plan all along, so I was not too affected by it.

So how are things working on Amazon? In my opinion they are working out pretty well for just starting the site and just listing on Amazon. The image below represents my sales for the last two weeks. 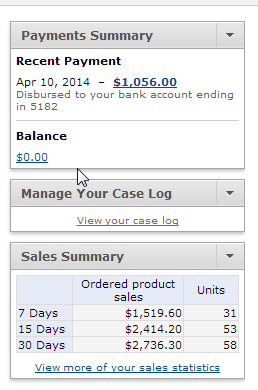 I am not getting rich, but considering after Amazon fees I am making about 15% on sales, it is not too bad. I have profited around $410 from Amazon so far. When everything is said and done from buying the theme, paying Amazon, buying the module, and paying inventory source; I have made I am down about $10. But this is just two weeks in. My projections put me at around $1200 a month in profits from spending about 10 hours a month on the site. Not too bad in my estimation.

I am so happy with things I am actually thinking about taking on more suppliers and trying to break into other markets with other products. If you are looking for a nice way to have a passive income, this could be your ticket. I know the extra money for me is paying for my vacation this year.