It is rare that I write a blog post talking trash about another company, I honestly cannot remember the last time I did. You might be able to infer that from my post on MOZ, but I am still a paying customer. But the other day a client came to me and wanted a Template Monster theme installed on their site. I have installed themes from just about every template company and some of them, especially some of the Theme Forest ones, are really polished. The Template Monster theme on the other hand was about the hands down worst theme I have worked with.

Why the Theme Sucked

First off let me show you the theme, this is it. It really is not a bad theme visually, it is a traditional 2 column theme that has a nice feel. That is where the fun ends though. I used the theme installer to install the theme, everything went smoothly until the end of the install. The theme used all of Prestashop’s native image names, so you have to go into each image type and change the sizes. Strike One. Well developed themes use their own image types, that way all you have to do is regenerate the images instead of going into 8 different image types, change the sizes, then regenerate.

First I decided to set the logo up on the shop. So I chose the logo file and uploaded it, then I refreshed the front of the shop and saw this.

Hey, it is not loading my logo image. So I inspected it, the reason why it is not loading the image is because it uses the wrong naming convention for Prestashop logo images. See Prestashop uploads logo’s based on stores, for multi store, even if you are not using multi store. So the default first store logo will be logo-1.jpg, but the theme was hard coded to look for logo.jpg. Strike Two. I had to open an editor to make the logo actually work.   While I have the text editor open, let me show you the areas of the theme that have to be edited with a text editor and that are not configurable through the backoffice.

If you want to add a link here, you better fired your text editor up. It is not actually a menu, it is just a file with static links to CMS pages, whether they exist or not.

There is a sneaky little advertisement in the footer you can see below. They have this advertisement written into one of the modules using a condition that makes it only show up on the home page of the site. 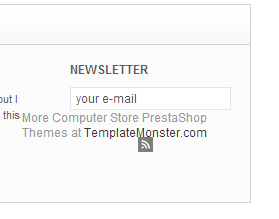 Strike Three. Basically, you have to pay for a theme, then if you are not capable pay for a developer to remove the advertisement for the theme company.

This is another sneaky one. I would have thought there would be a module that I could edit this. Nope, I had to use the text editor again.

Strike Four. This was actually not in the footer.tpl like one would think. It was in a module called TMFooterlinks.

Next I wanted to change the text and style of the free shipping at the bottom of the page, right above the footer.

So I went into the module and tried to add a tag to make the black text bold. Then I got the screen below.

Adding the tag basically deleted all the information from the module. If you check the error message out and ftp into your site you can see the module is very amateurishly made and actually stores the information in a simple xml file instead of storing the information in the database. This really sucks. I started looking at the other Theme Monster modules and that is how they all store the information. This means that you cannot use any HTML or certain foreign characters with the modules that come with the theme.   Strike Five. Unless I wanted to rewrite all of the modules for the theme I basically had to accept this fact.

In every module of the theme there were all of these fields. I thought I might be able to add more information for my slider, or for my footer block. I thought that was pretty cool, until I tried to use them. When I entered information though, they did not work. So I opened up the modules and saw that they were not actually connected to anything. Apparently they just reuse modules without disabling features that other themes might use. That is pretty sucky in my opinion, why not just write the modules correctly for the theme and disable what is not used instead of causing confusion? Below are some of the fields that are not hooked up. 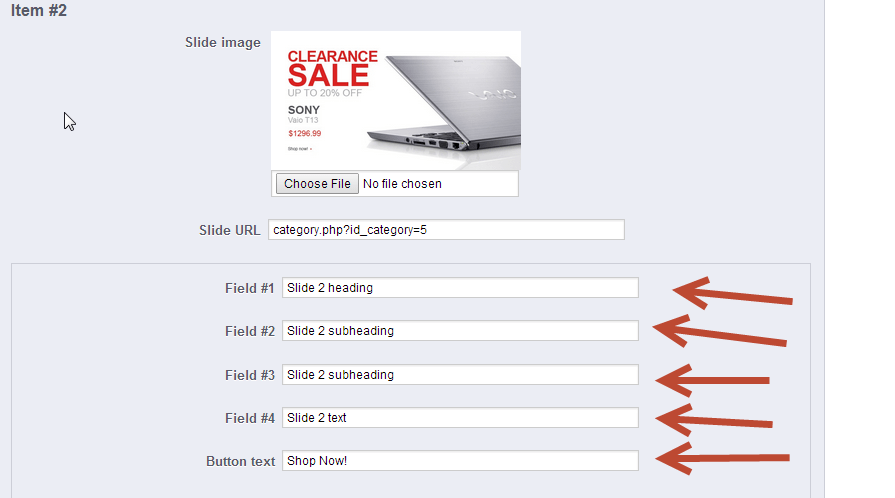 Strike Six. This is just lazy.

I like combining and compressing things. It reduces requests and generally just makes things faster. So I turned the CCC on in the theme and to my surprise instead of loading one Javascript file and one CSS file a total of 8 files were loaded. This means that the theme was not set up correctly to use CCC. Strike Seven. All it takes is moving a few files to the theme directory to utilize CCC, but apparently it was too much work.

I cannot say anything bad about the visual presentation of the theme, I think it looks professional, and it was exactly what the site needed. But the functionality of the theme felt like it was made by a beginner. Besides the problems mentioned, the modules were very limited, SEO was horribly if not non-existent in the theme, and for the most part it was just really a pain to work with. For what the theme is, it is about twice the price of a “excellent” theme. After working with this theme I would hands down recommend one of the high selling themes from Theme Forest. (I am not going to mention the name) There is a high selling theme on Theme Forest with 5-6 different configurations, 20 or so custom modules, and it is absolutely bullet proof. It is hands down the best Prestashop theme on the market. It makes themes like this one from Template monster look like a child developed it.